The Designers You Pretend to Know…But Really Should!

INDUSTRY
Faking it until you make it can only go so far... 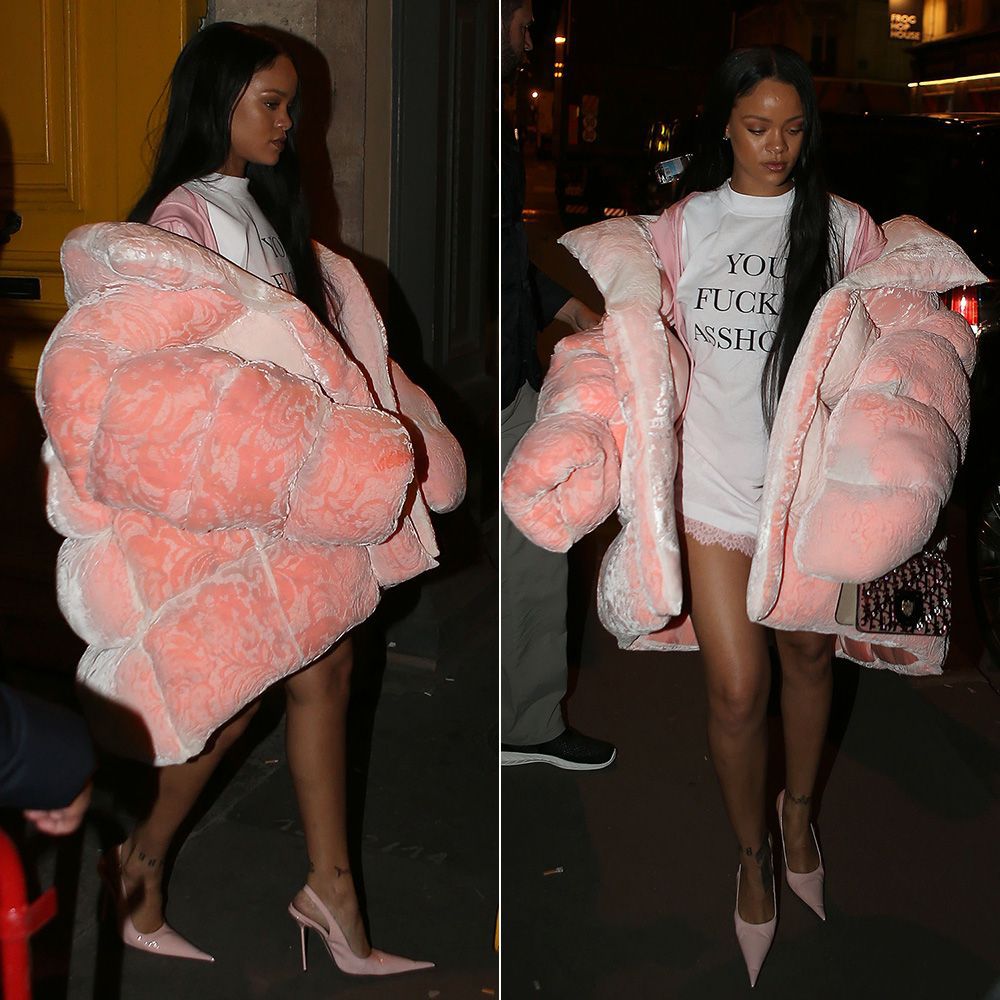 Faking it until you make it can only go so far…

With London Fashion Week in full swing, there’s no running away from the usual conspicuous conversations concerning key colours, silhouettes, mood/emotions and what ever else the next season has to offer. Up until now, you may have faked being as clued up as Sherlock Holmes when discussing the hottest designer on the fashion scene (I don’t blame you, the popular names change faster than the time). But there’s only so far the cool and casual bluffing game can take you, before you end up calling the designer Hedi Slimane a ‘she’ or saying “Oh I love him” when the female duo Attico is mentioned…

Read on to avoid the hot flush of cringeeeey conversations this season!

The cool girls of Instagram either wear Rosie Assoulin or are friends with her! 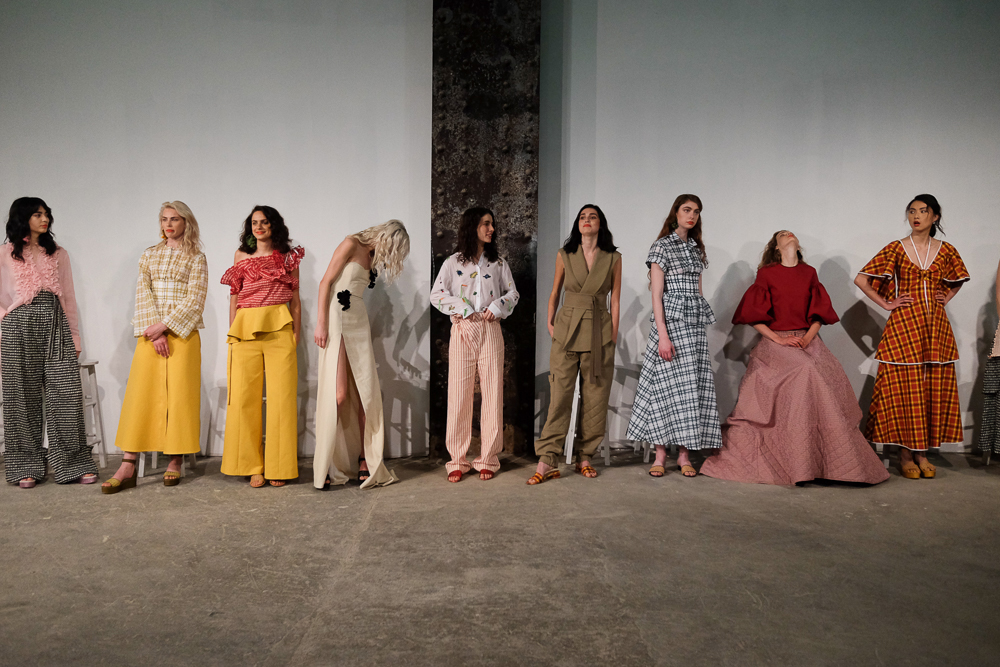 The exciting New York designer and winner of the CFDA Swarovski Award for womenswear has revolutionised day-to-night wear, in a quest to “make a ball gown feel like a pair of sweatpants.” If it couldn’t get any better at this point, she has also introduced garments adorned with hand-painted stripes, cascading dresses with real flowers immaculately pressed between layers of silk and the odd comic smiley sticker amongst them. Miniature clay pot earrings and shoes with hand-turned wooden heels…you’d be forgiven for thinking this was a theatrical show of surreal costumes.

Her collections, being exotic and voluminous, certainly do not hold back. One to watch is her floral puffer jacket with tufted buttons, reminiscent of a button back sofa. Each unique garment has a vein of interior design and inspiration from upholstered furniture running through it.

Having caught on that in one of Rosie’s designs, you will not go unnoticed; Rihanna, Margot Robbie, Solange and many more are snapping up her designs. It’s no surprise that Beyonce wore her ruffle-sleeved blouse in a scene of her iconic visual album, Lemonade. And just when you thought these ever-evolving collections couldn’t get any better, she has just ventured into footwear.

If you didn’t know Virgil before rumours ran wild about him taking over as Creative Director at Givenchy, then you’ve got quite a bit to catching to do… 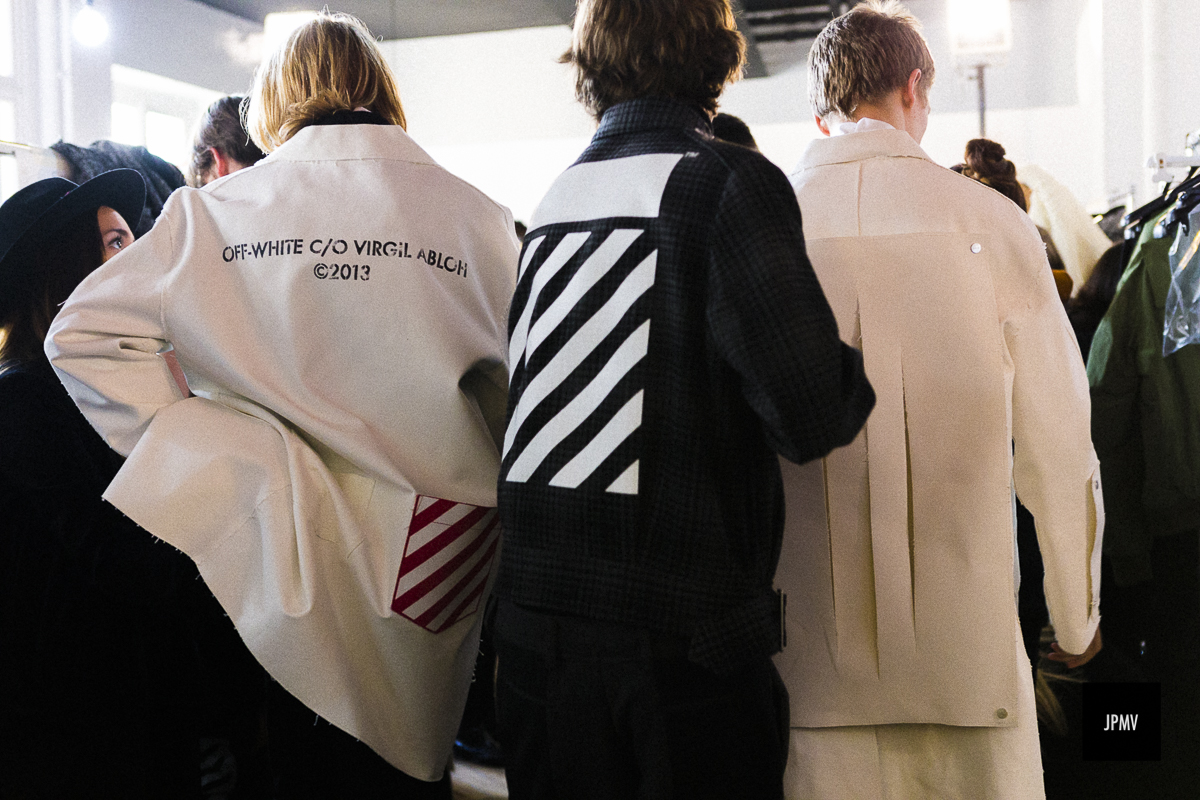 Not only is he the creative consultant to Kanye West; the American designer, DJ and stylist, is shaping the global fashion industry as we know it today.

Founder of the Milan-based label ‘Off-White,’ Abloh has always had a flare for design. Studying both engineering and architecture, his signature designs are synonymous, with loud, graphic t-shirts and diagonal stripes that almost resemble an optical illusion. The genius creative is raising the bar for upscale streetwear with a fresh take and inspiration from ‘youth streetstyle’. As he told Zac Baron of GQ, “these days a hoodie is pretty much the new suit jacket.” Comfort clearly being key to his success, for those of you who can’t get enough of casual wear, this is your man and off-white is your brand.

Gigi Hadid and Kendall Jenner have been spotted wearing his pieces, as well as Rita Ora, famously seen in his Diag Leather Biker Jacket.

This rising star was the only American finalist for the LVMH Prize for Young Fashion Designers in 2015, and recently collaborated with Levi’s to create a limited denim collection. Before creating the now well-known brand, Virgil’s intense love for fashion and creativity was channelled into the two previous labels he founded, Pastelle and Pyrex, which he voluntarily stepped away from to focus on Off-White

Abloh’s pop-up shop at Concept Boutique in Hollywood was a huge hit, with sales rocketing and now sees triple digit growth since it’s launch in 2013. Although still a young brand, the sheer force of its popularity (894k followers on the brands instagram) sees no signs of slowing down. 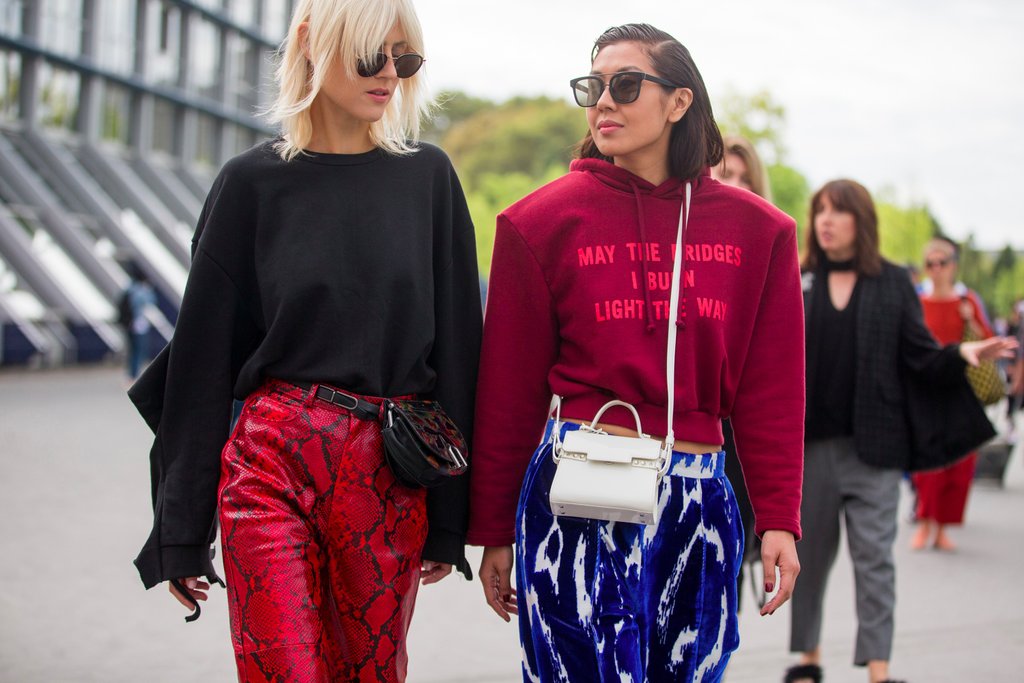 Head designer for the trending brand Vetements and now Artistic Director at Balenciaga. The creative genius is shaking up the industry and his following is sky rocketing. He was awarded Business of Fashion’s Person of the Year for 2016, as well as Vetements being shortlisted for this year’s LVMH Fashion Designer prize.

Gvasalia’s fresh and innovative approach to fashion is exciting to witness on the runway, the internet as well as spotting the trending garments on the street. Intricate research goes into each Vetements piece, and for this brand, identity and diversity are key.

This ever-evolving luxury street wear collection pulled out all the stops recently by collaborating with 17 major brands, including Levi’s, Comme des Garcons and Juicy Couture. Amalgamated into one show at the famous Parisian department store, Galleries Lafayette.

When Demna Gvasalia comes to mind, think exaggerated silhouettes, bold proportions and loungewear with a message.

If your power dressing tool consists of a well-structured shirt, you’ll need Palmer Harding in your life. 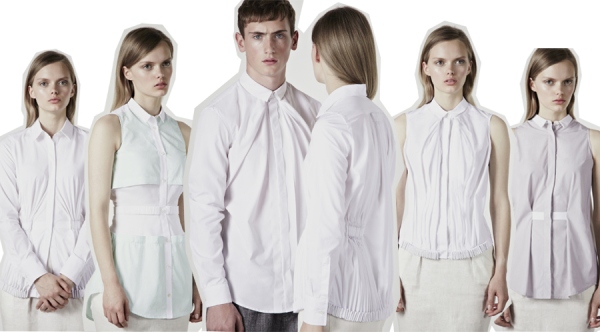 A two-page piece of coverage in American Vogue in their very first season, is reason enough to keep an eye on these two Central St Martins graduates. Levi Palmer and Matthew Harding, launched their exciting and contemporary collection early 2012 – with a heavy focus on shirts and nothing more.

Regularly featuring in Vogue, Elle, Marie-Claire, i-D, Wall Street Journal and more, this exquisitely tailored brand is designed for both women and men, and it is evident that their attention to detail is second to none and highly coveted by our favourite publications. “They’re only shirts” you may think, “How creative can they get?”. Yet prior to designing a collection, the pair will carefully sift through 300 – 400 types of white cotton, in a quest to find the perfect one and that is only the first step in the intricate process. The impressive duo instinctively maintain the balance between comfort and innovative tailoring.

Not only were they awarded NEWGEN sponsorship by the British Fashion Council and Topshop, they were also finalists for the Andam Award in Paris.

Keep an eye out for their SS17 collection, showcasing ideals of joyous freedom, exaggerated proportions and draping cascading folds of fabric. We should all have a Palmer//Harding shirt as one of our essential wardrobe staples.

The two girls best known channeling their influence into a business. 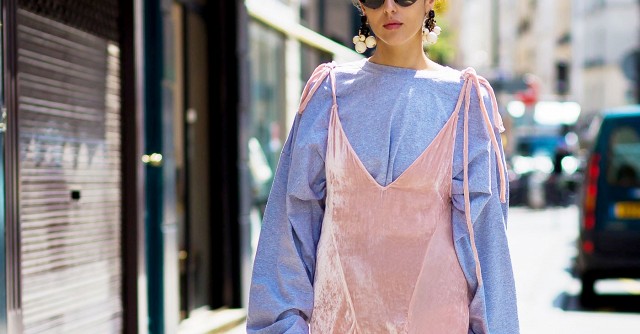 Launched only a year ago, two Italian designers with very different styles have combined their creative talents to bring us Attico (Italian for ‘penthouse’).

The brainchild of street-style stars, Giorgio Tordini and Gilda Ambrosio, is an exciting Milan-based label, amusingly thought up in a taxi ride together during NY Fashion Week. Mostly recognised for their sumptuous floor length silk robes, opulent fabrics are key to their aesthetic. Exquisitely designed in satin chinoiserie, embroidered velvet and silk, these gowns are intended to be ideally paired with essential satin pouches.

Originally inspired by the classic peignoir, they also take inspiration from flea markets,  antique kimonos, Asian interiors and even furniture. Their first collection quickly sold out and continues to do so. The vision for their pieces is to be as versatile as possible, with the Veruschka long rabbit fur and velvet coat being a particular eye catcher. Look out for their SS17 denim, these on-point essentials are the new power purchase.

“I ignored a lot of rules, but I am still here” 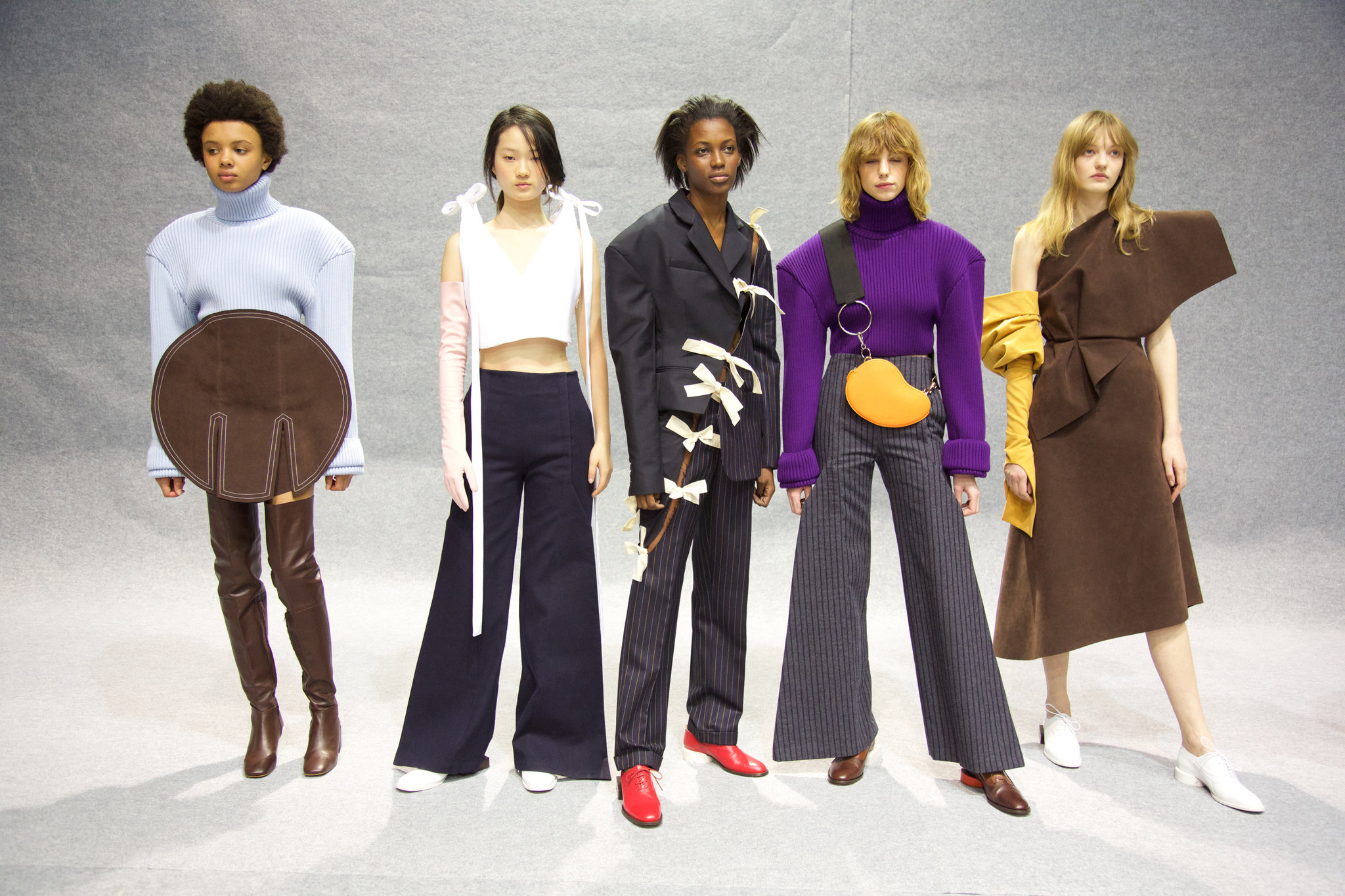 Only 27 years old, Simon Porte Jacquemus attracts a certain amount of controversy, in the best way possible. With no professional training and refusing to hire seamstresses, this self-taught designer is expected to generate nearly £4.5 million in sales this year alone.

His collections earned themselves the “craziest runway looks” a s tile by the New York Daily News. Simon’s unique creativity was evident as models strolled onto the catwalk with identical caricatures drawn onto the side of their faces, projecting a child-like, playful mood towards the upcoming reason. His looks are best known for their sporty minimalism, inspired by a love of 90’s style, as well as his desire to create a strong womenswear line in memory of his deceased mother, adorned with her maiden name, Jacquemus.

Constantly by fascinated by the strict nature of uniforms, most of his designs are deconstructed and spirited, often with asymmetrical patterns and featuring the classic French breton stripe. His huge online presence and following are a sign of his global recognition and unconventionally earning him a spot on the fashion scene. As he puts it,”I ignored a lot of rules, but I am still here”. And he deserves to be taken very seriously indeed.

How To Wear a Summer Short Suit in the Office